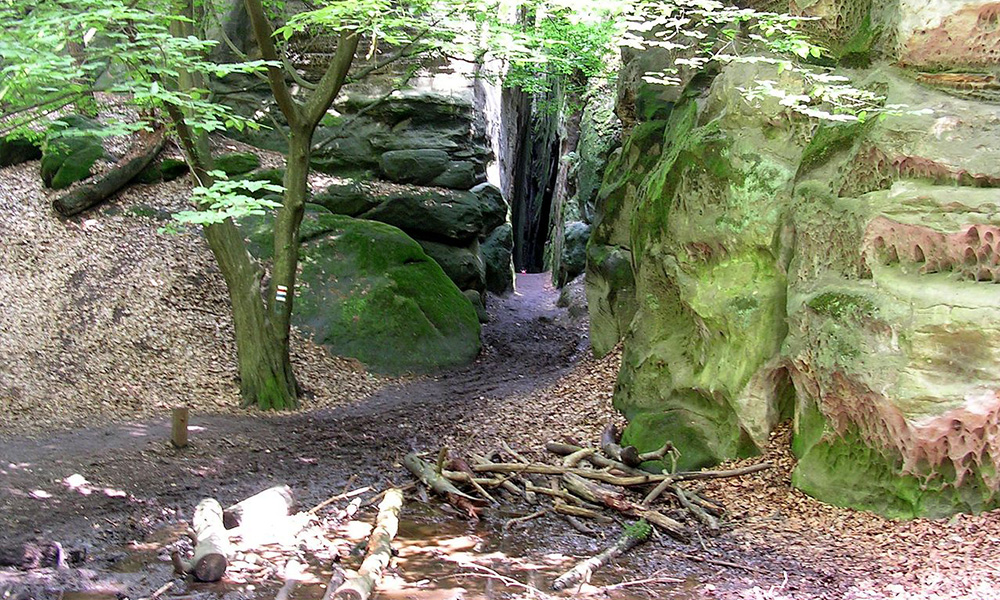 The Cold Passage is a rocky gorge in Příhrazské skály which got its name because cold air is always kept in this passage during summer months. The temperature is never higher than 10°C even in the sunniest days. This gorge was created when a block of sandstone block Mužský moved. It is 125 metres long and 15 metres high. In the times of the Prussian-Austrian war in 1866, there was an artillery battery above this gorge. Its aim was to guard the road from Munich to Trutnov. Prussian army attacked it and the artillery was forced to attack back (details in "Vrch Mužský" article).

In 1999 Příhrazské skály sandstone rock formations officially became a natural reservation. The main reasons for protecting this place is that it is a unique rock formations complex with natural and semi-natural forest communities and it is a geomorphologically very important territory. The highest point of the rocks is the hill Mužský (463,5 metres above sea level). There are totally 178 towers in this Příhrazské skály rock "city". A dominant feature of this place is a rock formation called Horse's Head. Nearby, there is a chapel Hynšta carved into the rock - in the 17th centrury this chapel served as a shelter for Bohemian Brethen.

You can have a nice walk on a "12-stops-nature-path" Příhrazské skály/Příhrazské rocks. There is a 100 metres high cliff on the north and west side of the rocks. The most popular place to visit here is Studený průchod/The Cold Passage.

To get there, follow the yellow tourist marking from Březina nad Jizerou or follow the red marking on which you can enjoy the sceneries with beautiful views from the hill Mužský.